The VASA Museum in Stockholm,
Photos of the Vasa Ship and the Scale Model in the Museum

We visited the museum twice, in July 1999 and in June 2011. I was very much impressed by the museum, as never before except for the Victory in Portsmouth. Here are photos of our second trip:

Photo gallery of the salvaged ship

Photo gallery of the 1 : 10 scale model in the museum

The VASA was one of the large warships built by Swedish King Gustavus II Adolphus. "Second to God, the welfare of the kingdom depends on its navy", he said, and used the ships to protect his interests in Europe. However, in the years 1625 to 1627 Sweden lost twelve major warships due to storms and a battle with the Polish fleet, and replacements had to be built.
By 10 August 1628 everything was ready for the VASA's maiden voyage. The weather was fine and the wind light. On board were around a hundred crew members, but also women and children. This was to be a great ceremonial occasion, with pomp and circumstance. When the ship left the shelter of the inner harbour of Stockholm, she approached the island of Beckholmen where she was struck by a powerful gust of wind, capsized and sank after a voyage of only 1300 meters.

In the treatise by Curt Borgenstam, Anders Sandstroem "Why VASA Capsized" (AB Grafisk Press, Stockholm 1995, ISBN 91-85268-60-7) the reasons are outlined, after a careful investigation of the wreckage and the historic archives. They concluded:
1. Too many design changes during building were made. The VASA was probably laid down as a "small" ship and completed as a "large" ship, with two gun decks instead of only one as originally planned.
2. The shipbuilding master Henrik Hybertsson became serously ill and died a year before the ship was completed. During his illness he had to delegate the supervision of the project to his assistant Hein Jacobsson. As a result the leadership on the shipbuilding side was very weak. Jacobsson had not even been informed that a stability test carried out in Admiral Klas Fleming’s presence hat indicated that the VASA was unstable.
3. By far too little ballast (only about half of the weight needed, as turned out when investigating the wreckage) had been put into the ship. That was ordered by Admiral Fleming, who resented more ballast, as this would have brought the lower line of gun ports too close to the water, and the military usability of the ship would have been hampered.

The salvage of the VASA and the VASA Museum

In 1961 the hull that had remained intact and many wreck parts were recovered. Swimming on her own keel the VASA was pulled into a dry dock. After the salvage the ship was carefully restored over many years. She can be seen today in the VASA museum Vasa-Museet in Stockholm. An impressing exhibition, with many details from the life on board at that time and a film over the salvage of the wreck and the restoration work.

The masts are restored up to the tops of the lower masts. In the photo at the left side of the museum hall you can see the model in 1: 10 scale with sails.

The photo gallery shows many views of the original Vasa and the exhibition that has replica figures, a reconstructed part of the cannon deck and the replica top of the main mast. If you click on a photo you will get that photo in high resolution.

In Wikipedia there is a comprehensive article about Vasa.

The Vasa model was built in the 1980s but has been painted only in 2007 and 2008 according the results of pigments research of many sulptures of the ship. Here are several views of the ship model. If you click on a photo you will get that photo in high resolution.

The model of the VASA is 1 : 10 scale. It is 7 m long and during our visit it was a center of attraction. With full sails and all ornamentation painted it gives a fine impression of how the original ship had looked. 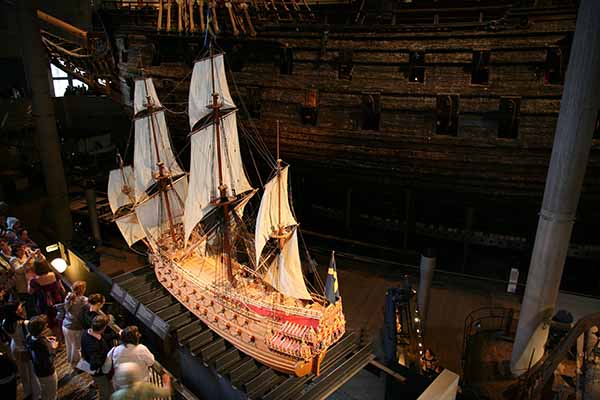